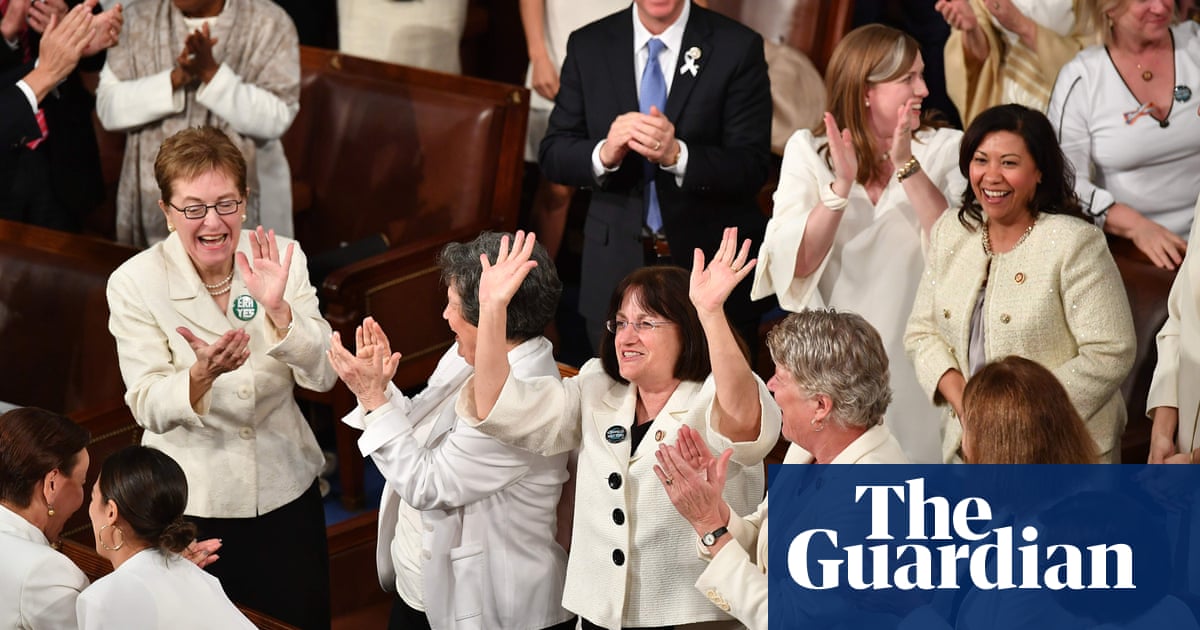 It was the night that Donald Trump, preaching unity but practising divisiveness, found his white minority rule under siege from Nancy Pelosi’s women in white.

A year after wearing black to support the MeToo movement, the record number of Democratic women in the House of Representatives wore white at the state of the union address to honour suffragists who won the right to vote.

Trump was in for a shock. When he declared, “No one has benefitted more from our thriving economy than women, who have filled 58% of the new jobs created in the last year,” the women in the House promptly stole his thunder.

Senator Kirsten Gillibrand rose to her feet, turned around and, like an orchestra conductor, waved her arms at the great white heart of the Democratic side of the chamber. Close to 100 women stood up, clapping, cheering, laughing, punching their arms aloft, a collective force that Trump had tried and failed to stop in the midterm elections.

Forcing a smile, he said: “You weren’t supposed to do that!”

It was a moment of euphoria that summed up a shift in the balance of power this year: Republicans, a sea of suits and ties, a little less raucous than in 2018, the “Make America Great Again” hats gone; Democrats, more diverse by every measure, now defiant and hungry for 2020.

Just as he did a year ago, Trump paid lip service to unity. He finessed the speech with citations beyond reproach: D-Day heroes and Holocaust survivors, Apollo 11 astronaut Buzz Aldrin, a 10-year-old girl fighting brain cancer, a Swat officer who saved lives at the Tree of Life Synagogue in Pittsburgh.

“The agenda I will lay out this evening is not a Republican agenda or a Democrat agenda,” the president began. “It is the agenda of the American people… Tonight I ask you to choose greatness.”

But the meat in the political sandwich was red and bloody. In perhaps the most stunning remark of the night, and the one most likely to be replayed years hence, Trump said: “An economic miracle is taking place in the United States – and the only thing that can stop it are foolish wars, politics, or ridiculous partisan investigations.”

It was a direct assault on potential House investigations in general and Special Counsel Robert Mueller’s Russia investigation in particular. He went on: “If there is going to be peace and legislation, there cannot be war and investigation.”

Some Democrats shook their heads. One or two heckles could be heard. No one knows how to lose an audience better than Donald Trump. And the descent continued rapidly.

Trump has been unimpeachable in uniting a country – in horror

Trump devoted no fewer than 25 paragraphs of the speech to the so-called crisis at the US-Mexico border – yet zero to the global existential crisis of climate change. He warned of “ruthless coyotes, cartels, drug dealers and human traffickers” and “the savage gang MS-13”. He claimed “large, organized caravans are on the march to the United States”, eliciting more Democratic head shakes and groans. He said he ordered 3,750 troops to the southern border, he said, “to prepare for the tremendous onslaught”.

He paraded a woman whose parents were killed by an illegal immigrant three weeks ago and an ICE special agent and reeled off crime statistics with grim relish.

Trump was also mendacious. He said the border city of El Paso, Texas, used to have extremely high rates of violent crime and was one of the most dangerous cities in the country but “now, with a powerful barrier in place, El Paso is one of our safest cities”. Fact-checkers say El Paso was never one of the most dangerous cities and crime was already falling when the fence went up.

Pelosi remained stony faced or glanced down at papers. Democratic Senator Kamala Harris, a presidential candidate sitting between potential contenders Elizabeth Warren and Sherrod Brown, pursed her lips and gave slight shakes of the head. Congresswoman and socialist darling of the American left Alexandria Ocasio-Cortez refused to stand or clap, at one point studying a badge on her jacket.

Trump went on to defend his trade war against China and his new deal with Canada and Mexico. He prompted more Democratic derision by asserting that, had he not been elected, America would now be at war with North Korea, and by demanding fresh legislation against abortion.

And he declared: “Tonight, we renew our resolve that America will never be a socialist country.” Republicans cheered while Ocasio-Cortez grinned broadly and Senator Bernie Sanders stroked his chin, perhaps realizing that such a call-out, on such a platform and from such a president was likely the best boost socialism in America could hope for.

When it was over, after an epic 82 minutes, second only in length to Bill Clinton in 2000, Republican Senate majority leader Mitch McConnell patted Trump on the back and Brett Kavanaugh – one of only four supreme court justices in attendance – appeared to say “Good job”.

But by then the women in white had bolted to the exits with momentum on their side.

… we’re asking readers to make a new year contribution in support of The Guardian’s independent journalism. More people are reading and supporting our independent, investigative reporting than ever before. And unlike many news organisations, we have chosen an approach that allows us to keep our journalism accessible to all, regardless of where they live or what they can afford. But this is only possible thanks to voluntary support from our readers – something we have to maintain and build on for every year to come.

This is The Guardian’s model for open, independent journalism: free for those who can’t afford it, supported by those who can. Readers’ support powers our work, giving our reporting impact and safeguarding our essential editorial independence. This means the responsibility of protecting independent journalism is shared, enabling us all to feel empowered to bring about real change in the world. Your support gives Guardian journalists the time, space and freedom to report with tenacity and rigor, to shed light where others won’t. It emboldens us to challenge authority and question the status quo. And by keeping all of our journalism free and open to all, we can foster inclusivity, diversity, make space for debate, inspire conversation – so more people, across the world, have access to accurate information with integrity at its heart. Every contribution we receive from readers like you, big or small, enables us to keep working as we do.

The Guardian is editorially independent, meaning we set our own agenda. Our journalism is free from commercial bias and not influenced by billionaire owners, politicians or shareholders. No one edits our editor. No one steers our opinion. This is important as it enables us to give a voice to those less heard, challenge the powerful and hold them to account. It’s what makes us different to so many others in the media, at a time when factual, honest reporting is critical.

Spot on: how to wear leopard print to work if you’re a man. >>> salonhanan.com