Latest Blogs
Home BEAUTY Troubling or not, Penn show is a treat 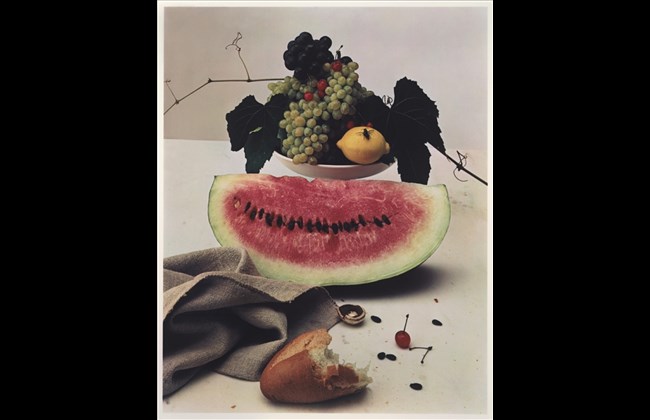 Troubling or not, Penn show is a treat

Lebanon is on a lucky streak, in its photo exhibitions at least. Not long after a show by Josef Koudelka, another featuring work by the master Irving Penn has opened in Beirut.

The Mina Image Center says “Untroubled,” its inaugural expo, is the first showing of Penn’s work in the Arab world. It assembles almost 50 images from the Pinault Collection, and comprises individual and group portraits, still lifes and fashion photos.

A pioneer in commercial and art photography, Penn trained as a painter and went on to become one of Vogue magazine’s top photographers. “We started with Irving Penn to shed light on the history of photography,” MIC Director Manal Khader told The Daily Star, and “to say that photography doesn’t start with us here … although it’s rather new in the region as an art discipline.

The exhibition’s title refers in part to practical considerations, Khader said. When she and curator Matthieu Humery began discussing the idea of bringing Penn’s work to Beirut, there was a “fear that Beirut is such an unsettled, chaotic [place] for the Pinault Collection to travel to. With these kinds of works, it was troubling for them. So we said, we’re going to do it and they’re going to be untroubled.”

The title also refers to Penn’s work itself. “Be it human beings or still lifes or a cigarette pack … he had this attitude of mixing all that, or putting them next to each other, as if they are related … His subjects are untroubled being next to each other,” she said, “and so are our series here [in the Beirut show]. Sometimes they are next to each other [but] have nothing to do with each other.”

Penn’s images are a point of reference in photography, including portraiture. “Untroubled” includes works from his “Small Trades” series, his “Corner Portraits” of famous sitters, an image of Pablo Picasso and the ingenious “Hands of Miles Davis.”

In “Irving Penn: Centennial,” the Metropolitan Museum of Art’s comprehensive volume marking 100 years since the photographer’s birth, Maria Morris Hambourg, former curator in charge of photographs at the MET, quotes Penn as saying, “The important thing is to get past the public facade [of the famous sitter, who arrives] armed with an image of himself.”

Penn’s commercial success went alongside his artistic production. He explored early printing techniques and refined platinum and palladium print processes that gave him the precise results he was seeking. He used these methods to print some of the extraordinary images in this show, including his “Cigarettes” series.

“Untroubled” is divided into nine sections, with photos from over four decades of Penn’s work, grouped fairly rigorously by subject, with the exception of the back wall. (Perhaps this last arrangement made sense in the context of the larger show from which this work is drawn, held in Venice in 2014, but here its effectiveness is reduced and it feels cobbled together compared to the previous sections. The “Small Trades” image in particular feels like a child separated from its family.)

For contemporary viewers, Penn’s untroubled gaze can be troubling at times. Witness three of the show’s four “World Societies” images, which Penn took in Dahomey (now Benin), Papua New Guinea and Morocco while traveling on assignment for Vogue in 1967-71.

As the accompanying text remarks, the Morocco and PNG images “created a sensation” when they were first published. They also raise some thorny issues, even if they appear entirely consistent with Penn’s aesthetic and way of photographing.

In his contribution to “Centennial,” anthropologist Harald E.L. Prins recounts how Penn proposed the photo essay in Dahomey for Vogue. For the photographer, he adds, “this place conjured up images of legendary black women warriors popularized in Western media as ‘Amazons.’”

Prins notes that “after having reduced the kingdom to a colony in the late 19th century, the French took a cohort of Dahomey warriors, including ‘ferocious’ Amazons, to Paris for public showings, followed by sensational exhibits in Germany, England, and the United States. Photographers, drawn to the people on display at these events, made images that circulated across the globe for many years, stirring the romantic imagination of millions, including Penn.”

Earlier in “Centennial,” Hambourg refers to “the diplomatic ties, power, and money of Conde Nast [media company] that invisibly scaffolded the pictorial campaign in Dahomey.” She adds that “even with a modest monetary payment thrown in, the difference in the relative circumstances of the sitters and the Vogue team was skewed … In their innocence [the sitters] became visual fodder for hundreds of thousands of strangers, objects of beauty and curiosity within a consumer matrix.”

Prins notes the colonial presence in Papua New Guinea was key to facilitating Penn’s visit there, and points out that the mud men performers he photographed were discovered by whites just over a decade earlier through “an intertribal dance competition” organized by “Australian colonial agents” who “invited delegations from about 30 recently pacified tribes to a sing-sing on the golf course outside town.”

As for Penn’s trip to Morocco, Prins notes that the photographer and his wife had visited in 1951, at a time when the country was still administered by France, and quotes Penn as remembering Morocco as “a mysterious world of casbahs, oases, horsemen and painted women.”

These brief observations help illustrate just how steeped in colonial realities these assignments were and how they relied upon and perpetuated an imperialist-Orientalist point of view, one that’s still largely unquestioned in the West, particularly when presented with such striking images.

This is unsurprising, perhaps. Penn was an American shooting in the mid-late 20th century for a Western fashion/lifestyle magazine – a perspective that almost inevitably exoticizes and commodifies the “other.”

If the persistence and perpetuity of this gaze is to be interrupted, the intersection of commercial and political interests reflected in Penn’s work must be acknowledged, as some “Centennial” contributors have done, and interrogated.

In the introductory text the exhibition curator penned for “Untroubled,” Humery writes that the decision to open the MIC with Penn’s work “is a mission statement, one that embraces the history of photography and the work of the late masters while looking to the future.”

Prompting audiences and photographers in Lebanon and the wider Middle East to engage critically with images, including those by great masters, is a crucial part of encouraging broader debate around photography, its past and present uses and the visual arts more generally.

This Penn show is a superb example of how important it is to bring exhibitions like this to Lebanon and the region, and to embrace a discussion of all the issues they raise even the troubling ones.

“Untroubled” is showing at the Mina Image Center, Beirut Port area, until April 28.

Why Maroon 5 And Travis Scott Won’t Be Paid For The Super Bowl Halftime Show. To more please click >>> festifair.co