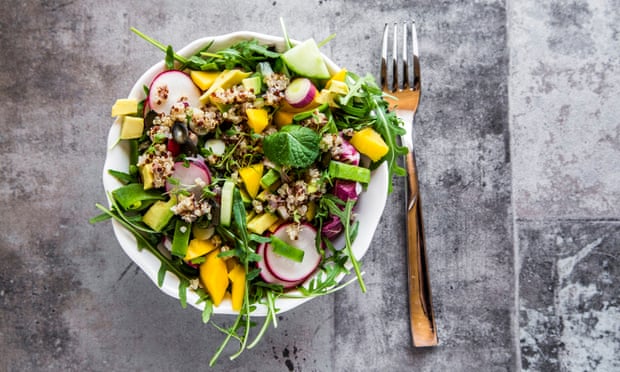 This is a simple one. Although the beneficial claims of “detoxing” your body can sound great: more energy, better digestion, squeaky-clean organs, it is in fact a myth that your body needs to be detoxed. You’re already born with the greatest detox system you need, courtesy of your liver, kidneys, skin, lungs and gut.

The British Dietetic Association is straight to the point on this one: “Detox diets are marketing myths rather than nutritional reality.” Simply put, your energy is better spent on a lifestyle that combines a healthy, balanced diet with exercise, and ditching harmful habits such as smoking. As NHS dietitian Catherine Collins says, it is “the only ultimate lifestyle ‘detox’ you need”.

A healthy, balanced diet can be broken down into five main groups. According to Public Health England’s Eatwell guide (pdf), most of what we eat should be comprised of fruit and vegetables and starchy carbohydrates, while protein and dairy should be consumed in moderate amounts. It also recommends that most of the fat in people’s diets should be unsaturated.

It can cost up to a 1,000 times more than tap water, but bottled water is still wildly popular. So, despite its carbon footprint and environmentally damaging packaging, are there any benefits to a bottle of mineral water? Not really. In fact, some say it’s less safe for you than tap water (due to the stringent treatment standard tap water has to go through in the UK), while research has suggested that people aren’t very good at tasting the difference between tap and bottled water anyway.

Although concerns have been raised about pharmaceuticals in drinking water, the World Health Organization says that current levels are too low to result in a risk to human health. Microplastics are another issue – a recent study found that the levels of plastic fibres in bottled water could be almost twice as high as those found in tap water.

So, what about using a water filter? Despite many believing it provides no additional health benefits, people choose to drink filtered water out of a preference for the taste. Just make sure to change or clean your filter regularly.

Do I really need eight hours’ sleep a night?

Eight hours may be the oft-quoted amount when it comes to how much sleep we need a night, but it’s not quite as straightforward as that. One way to look at it is by age: while younger children can need up to 14 hours’ sleep a day, adults (aged 18-65) are advised to get between seven and nine hours’ shuteye a night. This drops down to seven to eight hours for those aged over 65.

According to the Sleep Council, a full night’s sleep will include five or six sleep cycles, with each of these lasting around one and a half hours. Trying to keep to regular hours – meaning you go to sleep and wake up at the same time each day – cutting down on caffeine (especially in the evening) and indulging in relaxing rituals before bed, such as a warm bath or listening to quiet music, are among the NHS’s tips for a restful night. A good night’s sleep is beneficial for mental and physical health, and a great way to boost energy levels.

Is a vegan diet healthy?

A vegan diet has never been so popular; record numbers signed up to “Veganuary” this year, while statistics from the Vegan Society state that the number of vegans in Great Britain has quadrupled between 2014 and 2018 (up to 600,000 in 2018). While there is research to support claims that a vegan diet can be healthier, the key – as with any diet – is to focus on a balanced diet. A vegan diet means cutting out meat, fish, dairy and eggs and instead getting your nutritional needs from a plant-based diet. The NHS recommends paying attention to your intake of calcium, iron and vitamin B12 and doing your research on vegan sources of these nutrients. In addition, cutting out meat and dairy can have a wider impact: research from a major study into the damage of farming to the planet, published last year, suggested that avoiding meat and dairy is the single biggest way to reduce your environmental impact on Earth.

Eating after 8pm: is it really so bad?

There seems to be a lot of conflicting information around this piece of advice. Some research suggests that consuming more of your daily calories earlier, when you have an active day ahead, is better, but then there are those who say it doesn’t matter so much when you eat as what you eat. Plus, your age, work pattern and lifestyle all need to be taken into account. Worth considering, though, is having the majority of your calories nearer to when you need the most energy, and to avoid eating too close to bedtime in case you suffer from indigestion.

Why are we overweight and tired? Functional Nutrition could be the answer to your health issues. To more salonhanan.com