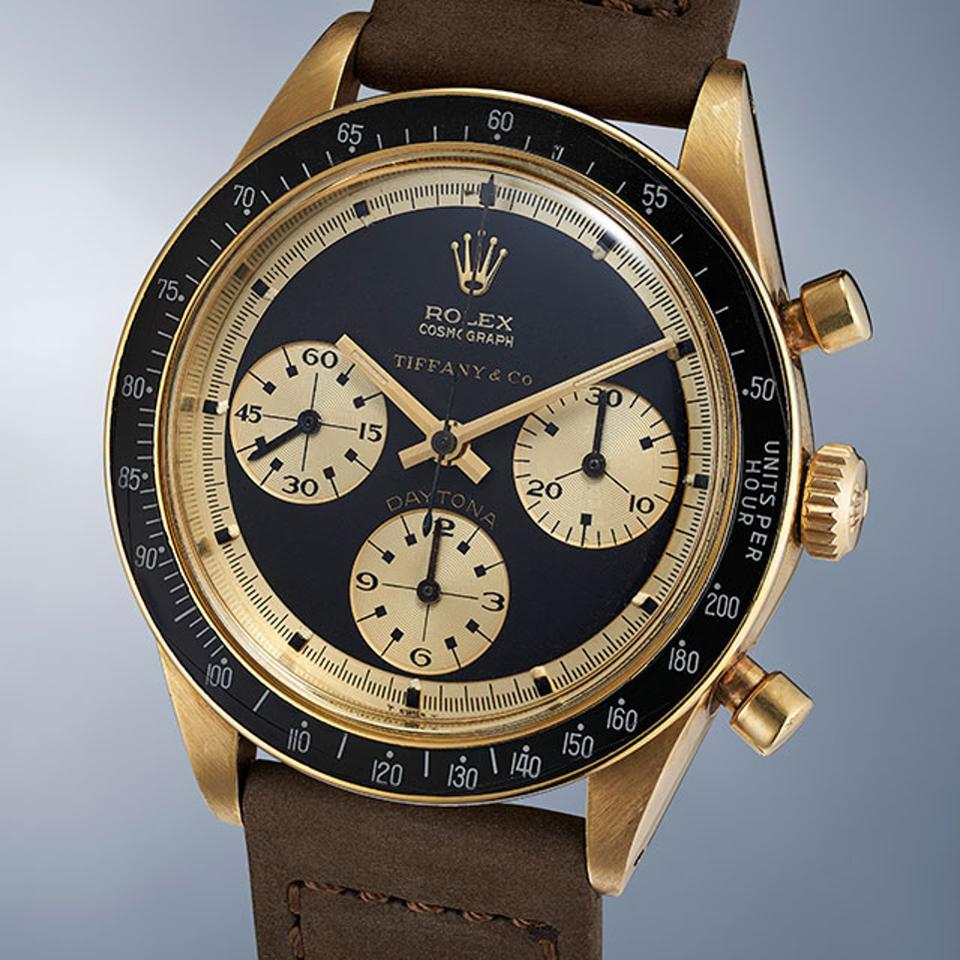 Phillips in Association with Bacs & Russo’s latest themed auction explores a niche that collectors are mad about. As part of its Geneva Watch Auction: Ten to be held November 9 in Geneva, it will host a sale of “Double Signed” pieces – watches that bear the name of a retailer in addition to that of the watch brand/manufacturer. Double signed dials, particularly Rolex and Patek Philippe examples, are extremely rare and thus highly valuable. They were made during a time when certain retailers around the world were important partners with watch brands, co-creating watches geared to specific markets. The sale will include pieces made in partnership with American retailers Tiffany & Co, Baily Banks & Biddle, Venezuelan retailer Serpico y Laino, Swiss retailer Gübelin, and Italian retailer Hausmann. There is big money in these watches. Of the top ten watches sold at auction last year, two were double signed. A Patek Philippe Ref. 2499 perpetual calendar chronograph co-signed by Serpico Y Laino sold at a Christie’s auction for $3,234,905. Another Patek Philippe Ref. 2499 co-signed by London Jeweler Asprey sold at a Sotheby’s auction for $3,915,000.

Highlights of the Phillips sale include:

– The only publicly known pink gold Patek Philippe chronograph reference 533 with a pink dial that is signed by Italian retailer Hausmann. Reference 533 was in production from 1937 to 1957, and was made in very restricted numbers. Phillips says the total production was about 350 pieces, of which exceedingly small numbers were cased in pink gold.

– A yellow gold Patek Philippe perpetual calendar chronograph Reference 2499/100 retailed in Switzerland by Gübelin, with original certificate. It is one of only four examples in yellow gold (in any series) to bear the prestigious Gübelin signature on the dial.

– A rare pink gold Patek Philippe chronograph Reference 1463 with pink dial made in 1952 and retailed by Serpico y Laino. Manufactured from approximately 1940 to 1969, the reference 1463 is one of the most popular vintage chronograph wristwatches on the market today. According to Phillips, only four examples of 1463s in pink gold with pink gold dials that were retailed by Serpico y Laino have appeared in public to date.

In the last two years, Phillips in Association with Bacs & Russo has held themed auctions entitled Heuer Parade, Daytona Ultimatum and Winning Icons, in which it sold the Paul Newman Rolex for a record $17.7-million. Also coming up this December in New York is Game Changers, a sale of watches owned by extraordinary people, which will include a Rolex owned by Marlon Brando.