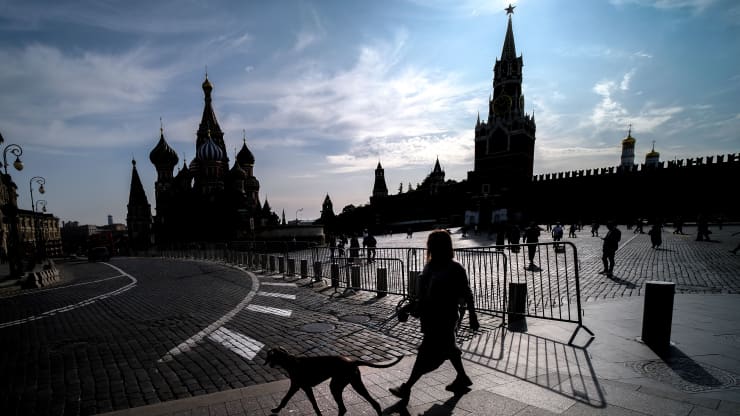 Moscow rejected new sanctions imposed on it by the U.S. late Tuesday, describing the restrictions led by President Joe Biden’s administration as “hostile.”

Russia’s Ministry of Foreign Affairs said last night that it would retaliate against what it said was a “counterproductive” act that aggravated bilateral relations further.

“This is just a pretext for the continuing undisguised interference in our domestic affairs, and we will not accept this,” Maria Zakharova, a Russian foreign ministry spokeswoman, said in a statement.

“Based on the principle of reciprocity, we will respond but not necessarily with symmetrical measures.”

She added that sanctions would fail: “Any hopes to impose something on Russia by way of sanctions or other pressure have failed in the past and will fail now.” She did not elaborate on how Russia might respond, however.

The comments come after the U.S. imposed further sanctions on Russia for its suspected poisoning of opposition leader Alexei Navalny last year. Washington imposed restrictions against seven senior Russian officials and on 14 entities “based on their proliferation activities in support of Russia’s weapons of mass destruction programs and chemical weapons activities,” the U.S. State Department said.

Navalny, a fierce critic of Russian President Vladimir Putin, was poisoned with a military-grade Novichok nerve agent in August. Navalny was flown to Germany where he was treated, and recovered from the poisoning. The Kremlin denied any involvement in the poisoning that Navalny claimed was politically motivated.

On Navalny’s return to Russia from Germany in January, he was immediately detained and charged with violating his probation for a previous suspended sentence.

At a subsequent trial in early February, Navalny argued he could not attend the hearing given that he was in a coma following the poisoning. Nonetheless, he was handed a 3½-year jail sentence with 10 months deducted for time spent under house arrest.

The U.S. and EU had held off imposing sanctions following the sentence, calling for Navalny’s immediate release. Both were compelled to act given the lack of movement by the Kremlin, however.

The U.S. coordinated the sanctions with the EU, which issued its own restrictive measures Tuesday, sanctioning four senior government officials that it said were “responsible for serious human rights violations” and involved in Navalny’s “arbitrary arrest, prosecution and sentencing.” The restrictions came on top of other measures imposed last October when it had restricted travel and frozen the assets of six Russian officials, and one entity.

Secretary of State Antony Blinken said Tuesday that the U.S. had sent a “clear signal that Russia’s use of chemical weapons and abuse of human rights have severe consequences.” But some don’t think the measures have gone far enough to deter Russia from similar abuses in future.

Russia is already operating under sanctions for its 2014 annexation of Crimea from Ukraine, 2016 U.S. election meddling and the 2018 Novichok poisoning of former spy and double agent Sergei Skripal in the U.K.

Timothy Ash, a senior emerging markets strategist at Bluebay Asset Management, called the latest sanctions a “total joke” and said they did not hurt Russia, citing a rally in the Russian ruble as a sign that “the market likes it, thinking that these are very soft sanctions.”

“Regardless of the U.S.’s enthusiasm for sanctions we will continue to consistently and resolutely uphold our national interests and rebuff any aggression. We urge our colleagues not to play with fire,” she said.

“If the U.S. is not ready for an equitable and reasonable dialogue, this is their choice.”